Foreword to One Person's Journey

We often advise people who are studying the Bach flower remedies to keep a track of their emotions. Keep a remedy journal, we say, and note down how you feel about the situations you encounter. Journaling helps us learn the remedies because we see how they relate to our lives. It also helps us learn about ourselves and our feelings. The best journals are always about humanity, and about growth.

In contrast, an occupational hazard threatens people who write more formally about the remedies. It occurs when we focus so hard on the system, on remedy indications and dosage and so on, that we forget to put any people in. This is especially strange because the whole focus of Edward Bach's work was people – their personalities, their feelings, their emotions. Humanity is central to the remedies.

That, in a nutshell, is why this book is special. More than a book about remedies, this is a book about people. Using her own life and experiences as a framework, Nicola Hanefeld introduces us to those fundamental feelings and personalities that are the basis of Dr Bach's system. She tells us about her life, her faults, her qualities, her relationships. The stories are human, sometimes wry, always engaging. Some will move you; some – I'm thinking about the tale of how Nicola came to own a Cerato plant – are gentle and funny. The decorating story made this reader laugh out loud.

This book teaches the remedies because it's all about life. That's putting things in the right order.

Sommer 2004: Although I had been using the remedies for about 18 years there were still a few remedy plants that I had never encountered growing freely. Cerato is one of them and this strange story began with a difficult personal situation I experienced in July 2004 when I needed a lawyer. She was competent and well recognised but quite a hard liner and was fighting (as I had indeed asked her to do) for my rights. I felt myself to be in good hands and trusted her judgment and approach to the situation – it appeared to me as the right and correct strategy. However, I started sleeping badly. Some disquiet was obviously gnawing at me. In the middle of one night whilst neither really asleep nor properly awake, I got up and walked trance-like to my remedy box. Without looking, I took two drops pure on my tongue of the first remedy that I had touched in the darkness. Back in bed I immediately fell into a deep sleep. I awoke refreshed, something I had not experienced for several weeks. My first activity was to contact my lawyer and ask her to change her policy to a milder one which meant losing my cause and stopping “fighting”. I did this without making a conscious decision to act. Afterwards, I reflected and then suddenly remembered that I had taken a remedy in the night. I walked to my box and was surprised to see that it had been Cerato, a remedy that I very seldom take. There it was standing alone, outside the box. However, as I was feeling clear and peaceful, I interpreted the decision to change course as coming from a deeper part of myself that Cerato had brought to the fore. I slept much better as a consequence in the following weeks.

The 7th International Alexander Technique Congress was being held in Oxford and I went to England for it. Prior to this, I visited the village where I grew up for a couple of days. I am somewhat short sighted but do not always wear my glasses. While I was out for a walk one afternoon, I saw or rather “felt” a blur of spectacular deep blueness a few feet to my left in front of me. Enchanted, I approached the plant bordering the road from someone’s garden and recognised it as being Cerato. I enthusiastically greeted the plant (I love talking to plants) and drew in the impressions of the delicate petals, the deep saturated blueness and touched the surprisingly rough leaves and wiry, wooden stems. Two days later, now in Oxford, I encountered Cerato again where I was having lunch. A whole border was covered with vibrant and beautiful masses of Cerato that seemed almost to glow from within. A lush carpet of dark, softly shining leaves surrounded the beautiful cobalt-blue flowers. I could hardly believe that I had never met this plant previously.

On the same evening I met the plant yet again in the garden of the house where I was spending the night in Oxford. I suddenly spotted a low growing small Cerato plant and commented on it to my surprised hostess. As she had only brought it and planted it on the previous day she could not understand that I had even noticed it. The brilliant sky-blue flowers in the late summer light had captivated my attention. I explained why the plant was special to me and also told her that the elegant Cerato is Tibetan-endemic. A couple of days later, being not far from Sotwell I took a trip the the Bach Centre and – you´ve guessed already - Cerato was there yet again, this time hardly surprising at Dr. Bach´s home.

In September, back in Germany, I knew now that I had to have my own personal Cerato plant - but where to find one? Journeying around garden centres did not appeal to me, above all without knowing before hand if they even had it in stock. I need not have worried; as I went shopping at my local supermarket for the first time following my return, my eyes fell on a small, solitary (and decidedly feeble looking) Cerato plant on the floor upon entering the supermarket. It was labelled an “Autumn special offer” and was priced at 2,22 Euros. I stood there a little bemused. Then smiling, I bought it and left quickly. Back home I had a good chat with the plant and gave it some of the rescue remedy. Within 3 days I was rewarded by dozens of the electric blue flowers vivid against leaves now tinged red.Autumn was approaching. Since then I have kept Cerato on my balcony and make it a habit to take it now and again to support my own listening to that quite inner voice, always remembering the strange series of events that led me to getting acquainted with the plant.

The indecisiveness of someone in a Cerato state is coupled with a search for advice from other people. If one hears “my girl/boyfriend says” … “my husband/wife advises” … “my therapist/doctor/pharmacist said” … one should be alert to a Cerato state. Supporting someone to discover their own answer to a question and not influence the person can require some holding back. (We do so love to give advice.)

Many years ago I was acquainted with someone with a Cerato-Scleranthus personality. She would place problems at my feet and it was as if I should decide what she should do. As I did not involve myself in solving her problems, it remained a superficial encounter. 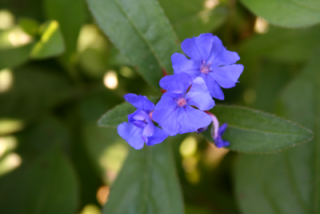 Ceratostigma willmottiana, also known as Chinese Plumbago is named after Ellen Ann Willmott (19 August 1858 – 27 September 1934) an English horticulturist who cultivated more than 100 000 plants. 60 species of plants are named after her. As it received her name, we may speculate that Cerato was discovered by her and that she also introduced it to the western world. It is native to western China and Tibet but is now frequently found in gardens in Europe. It is planted these days as a much valued ornamental but very hardy deciduous shrub with rich blue flowers that come out in late summer / early autumn when the leaves start to turn from green to red. The stems become woody as it grows in age but it dies back in winter to ground level, almost disappearing during the cold season only to reappear in late spring. The attractive flowers are presumably pollinated by insects in its native habitat. I have never discovered any seeds on my Cerato plant; it reproduces vegetatively underground, new sub-plants (clones) springing up a few centimetres away from the original plant. Botanically seen, it is related to the carnations, but also cacti and many carnivorous plants. Cerato is revered as a symbol of wisdom in Tibet.

Cerato was the only cultivated plant chosen by Dr. Bach. He first prepared it near Cromer, Norfolk in 1932 using the sun method.

Watch a photo-story video with photos from the book. 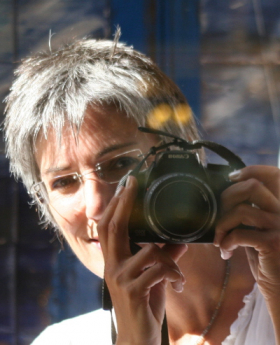 was born in 1958 in London and graduated from Reading University with a combined Honours degree in Botany and Zoology in 1979. She is a teacher of the Alexander Technique and has been a Bach Foundation Registered Practitioner (BFRP) since 1997. Nicola lives in south-west Germany and is mother of 3 children. She has enjoyed doing semi-professional photography for over 30 years and has kept a journal on her life since she was 14. These journals were used as the basis for the stories in this book.

What readers are saying about One Person's Journey

"I am impressed by the courage and clarity shown by Nicola as she writes about her own journey through life with the flower remedies. When reading it, you are drawn in to compare the stories and experiences with your own journey of learning and growth and this gives us a deeper understanding of the remedies and their relevance to our own lives too. I have loved reading this book. It made me smile and tore at my heart too. The book has something to offer to everyone – practitioners as well as people who know little or nothing about the remedies. It is about life – a life lived."

"I almost cried while reading 'Danke Joris', very well written. In general I actually think it’s a very useful book. Pictures, anecdotes, botanical notes and a quick reference table in the back, what else could one wish for."

"I really found the book compelling reading - very insightful and I recognised many states in it (particularly having an immovable view or opinion!) it flows really well - it's modest too but very descriptive in terms of your emotions."

"This book has such an interesting concept. Starting with the names you have so aptly selected for each chapter. I love the pictures and the idea of writing botanical details for each flower and when & how Dr Bach added each one of the 38 remedies. Each chapter is so touching! As I read, I go through my own experiences and so many situations when I could have used the Bach remedies as near and dear ones suffered and I could do 'nothing' ... I have read many books on BFRs but this one is special."

Since I have received your book I have not let it go! It is incredibly written, interesting and exciting. I have found an even deeper respect towards each flower and can remember them now much better. Your confidence and your biography touch me very much and your honesty gives me a lot for my own personal development. I'm on page 187 and save a story for each day."

"Nicola provides an invaluable opportunity through her personal stories for us to get closer to the Bach flower remedies and in knowing them more, we can also learn more about ourselves. In addition, Nicola is also a gifted botanist and photographer with a keen eye for detail. In this book she has collected botanical notes about Dr Bach’s plants complemented with her fabulous photos. She has woven her personal and professional stories in such an engaging and informative way and made the links to the remedies and the botanical details. It feels very authentic."