Studying the various Bach flower remedy plants through the years means being familiar with how they behave. We usually only think of animals as behaving (or people) but I think plants behave as well. This year, after a cold April and during a wet May I was surprised at the behaviour of the red chestnut trees around me. They were pale. They looked washed out. I could have understood if it had only been one tree here and there looking a bit ill but they all looked wrong. Usually, the red of red chestnut trees is a cheer to the eyes after a long winter, this year they looked drab. It could hardly be due to lack of water because we‘d had a lot of rain I thought. And it couldn‘t have been due to some kind of local mineral deficiency as they all looked dull, faint and faded. (Yes, I did start to feel a bit sorry for them and concerned.)

One day I decided to investigate the phenomenon and was surprised by what I found. I had been giving courses (as some of you know) on the botany of the Bach flower remedy plants and I had shared with participants that white chestnut trees signal to insects by changing the colour of the flowers whether they have been pollinated or not. Red for don’t bother to visit, yellow for yes please! A participant in one of the courses asked if red chestnut (Aesculus x carnea) does this as well as it is a hybrid of Aesculus hippocastanum (white chestnut) and Aesculus pavia. I was not sure of the answer but I said I don‘t think so. I was wrong. 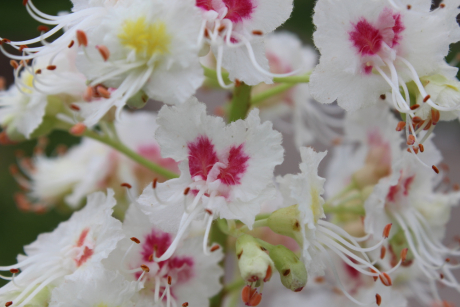 Managing to pick some of the red chestnut flowers, although they were up high, this is what I found: the flowers were all pale because they were yellowish (on the right in the photo below), only a few were the familiar red colour. They had the same genetic mechanism as white chestnut trees only I had never observed this! They had not been pollinated and were looking dull for this reason. Why had they not been pollinated? Because it had rained heavily for weeks. (If you’re a bee and get a raindrop on your head, that is death by concussion! So stay at home.) 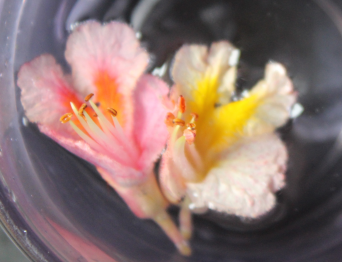 So there you go, a new learning point, I was delighted. Above all at Nature’s mastery. And thank you to the participant who asked the original question, I'm afraid I don't know who you are :-)

POSTSCRIPT from my colleague Gwenda Kydd,  BFRP: 'It's an interesting phenomenon and happens elsewhere too - seemingly it improves the success rate of pollination (as most insects see red flowers as black, they no longer look worth visiting). An experiment which looked at 2 plants from the same genus showed striking differences (just gave a talk where I talked about this today!)...Weigela coraeensis has flowers that change colour – from white to purple - when they are pollinated but Weigela hortensis, has flowers which don’t. It was found that the colour-changing flowers achieve 95% pollination, compared with 25% in those which don’t change.' Read more on Gwenda's work here.