Yes, I have been quiet. It was not only that I have had a lot to do, but also that something happened at the end of January. It was a Tuesday and actually, three things occurred on one day. Firstly, I heard that someone who is important to me is terminally ill. Secondly, I had a car accident.

I had driven into the end of a traffic jam, had to brake sharply. As I did this, I switched on my warning lights and checked my rear mirror to make sure the car behind me had enough braking distance. I saw he did. But looking again, a split second later, I saw that the car behind the car behind me was going much too fast and that an accident was imminent. I braced myself for the crash and then it came, more a loud thud than anything. I remained seated for a few minutes and took some of the rescue remedy, calming myself. Then I got out and went to the two men whose cars looked demolished. My car was not badly damaged as the car behind me had only been pushed into me. The man who had caused the accident thought things were 'not that bad' - I was surprised at his judgement. The man who had been pushed into me asked if I was ok. I said I was shaken but not injured. The police arrived, the cars roared past us. It was cold. I went to sit in my car again and tried to reach someone on my phone to talk to. Neither my partner, nor son or daughter or girlfriend answered. I noticed how much need I had to talk - to talk and digest the accident. 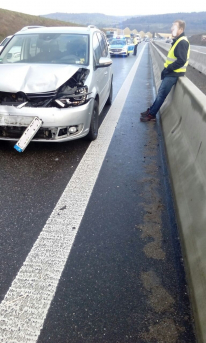 Soon, a policewoman came and took my report. I then got out of the car again and spoke to the driver of the car that had ploughed into the car behind me. I said I was surprised that he didn't ask if I was ok. He answered that he thought I was a just passenger. The tense way he was smiling and minimising things made me realise he was in Agrimony mode (denial).

After a while, I could continue my journey. I drove home slowly, thoughtfully. My daughter and girlfriend rang me back and I took time at a stopover to talk. By the time I was home, I felt ok. But when I unpacked my things from my time at my partner's place the third thing happened that made me wake up more than anything else. The Elm bottle that I'd had with me fell out of my bag and broke. I have been using the remedies for 30 years this year and it is actually only the second time a bottle has broken. So I have taken the message to heart and been taking it easy. That is why I have not written anything for the blog for a long time... 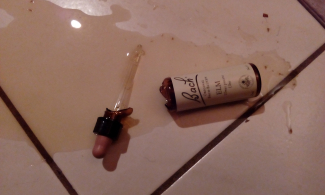 Elm is the remedy when we feel overwhelmed. Yes, I'd thought, it is all a bit much at the moment: clients, courses, studying for a PhD, the news of the terminal illness, an accident ... message heard and understood.

My comments Subscribe
Carla 2 years 10 months
I found your blog earlier today in a moment of dispair. Thank you for sharing your thoughts and knowledge on the Bach Flower Remedies.

Ali Hanley-Collings 2 years 10 months
Sorry to hear you've had a difficult time. I missed your blog! Stay well and be safe xxxx

Lesley 2 years 10 months
Bad luck re the accident Nicola! What a cheek re the ‘thought u were just a passenger’! Not courteous on any level! All the best for your Elm-supported recovery.