I hesitated before I wrote this piece, I was not at all sure how to write it.

The Bach Centre recommends using the ‘story-feelings-remedies‘ formula as guidance to find which remedies are appropriate in a certain situation. The story of this blog posting is shocking in its immensity. On 14. July 2021 floods in Germany of unprecedented intensity swept 181 lives away. Hundreds of houses, dozens of villages, kilometres of roads and rail tracks and bridges and very many people’s livelihoods were decimated. As of 28. July, 73 people are still unaccounted for and are officially missing, hundreds were injured.

As I publish this piece, the clearing up has been going on for two weeks. Mud is being shovelled out of cellars and houses, ruined furniture and electric appliances are being carried out of homes to be scrapped. Roads have been cleared but thousands of people are still without fresh drinking water, electricity and gas and they will be for months to come. It is shockingly chilling that many of the dead cannot be identified because DNA tests to identify bodies are not possible. Why? Because homes have been washed away and tooth or hairbrushes (with people’s DNA) no longer exist. Likewise, dental records.

Western Germany was not the only area hit by these floods: Belgium and Holland were also subject to intense rainfall in a short space of time and people drowned there too. Just to give an orientation of how the rain came down: one little river, usually 60cm deep, flowing gently through a sleepy German village turned to an 8m high violent torrent within only 24 hours.

Moving on to the feeling part of the above formula, it‘s clear that the tragedy left thousands of people in a deep state of shock. The extent of the catastrophe, its magnitude, left people completely disorientated as they face the loss of everything they had ever owned. Many only had their lives left - everything else was destroyed in the floods. Look at the woman in this photo… she’s made herself something to eat in what is left of her sitting room. Note the tide line indicating how high the water was in the room. 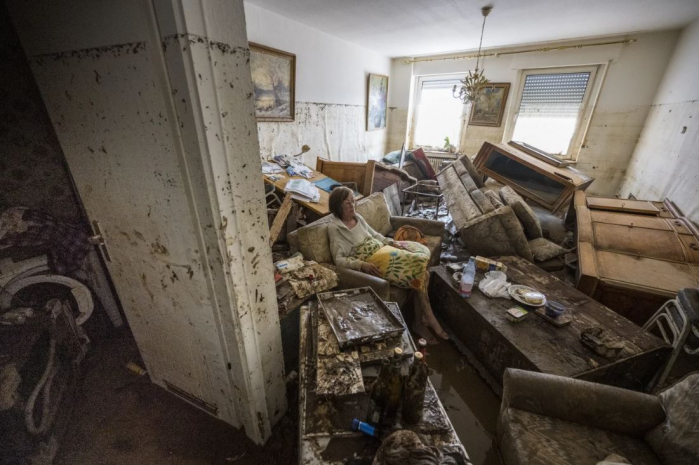 As people got busy trying to clear the devastation up, the shock was counteracted by activity but deep desperation is still continually surfacing. I too found myself in a state of shock and disbelief - I had never seen anything like this in Europe before. Happening only a few hundred kilometres to the north of where I live. We’re ‘not used to‘ this kind of tragedy. In our minds… this belongs to third world countries…but it doesn’t, does it?

On the positive side of things, overwhelming, heartwarming solidarity arose in the community as 1500-2000 helpers each day from outside the catastrophe area drove in to lend a hand. Double that amount at the weekend. Millions of euros have been donated by the public and of course, the government will support the flood victims. But can money really solve this?

The remedies relating to this story are not difficult to identify: Star of Bethlehem and Sweet Chestnut seem top of the list but I also wonder about Gorse for hopelessness and maybe Wild Rose for resignation. I know that I for one, am starting to resign about national governments lack of notable action to counteract climate change and climate collapse. I fail to see decisive action on greenhouse gases as the cause of global warming and a factor promoting extreme weather events.

I’ve puzzled now for two days on how to conclude this piece. I simply don’t know and will leave it at that. 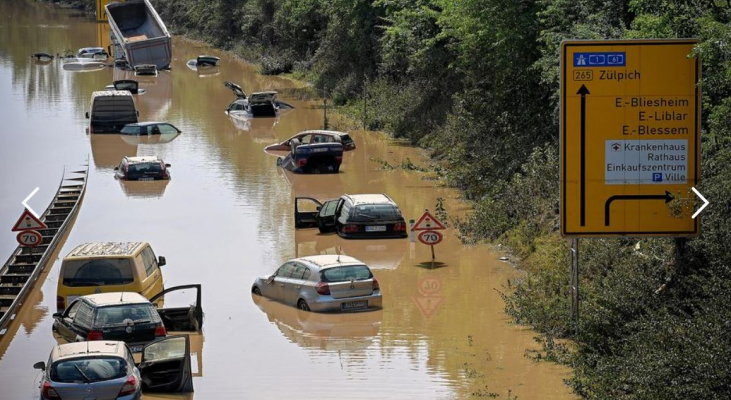 Photo: Thomas Lohnes/Getty Images. The water recedes, destruction remains: Jutta Schnelleckes, 72, in her room that was once her lounge in Bad Neuenahr. Cars and lorries on the B265. Photo: EPA

My comments Subscribe
ROS THOMPSON 1 year 6 months
Such an enormous tragedy on such a huge scale, all the more so that it happens in beautiful area of Europe. The total destruction that can be caused by mother nature - and yet we don't seem to have respect for it. Your Blog is so beautiful and kind and tender in the wording. My heart goes out to everyone affected by it.

nicola 1 year 6 months
Thanking you for your gentle words Ros....

Lesley Cooke 1 year 6 months
This is so upsetting to read Nicola, I can understand your distress. Yes we do think of it being a 3rd world problem which only goes to show how *we* (in the west) have assumed it doesn't affect us. Thank goodness we have the flower remedies to help us cope emotionally - goodness knows how people cope who have no such support.

Nicola 1 year 6 months
You understand how upset I am Lesley... thanking you for that. We have to wake up what we're doing to the planet.